When Velu Jayaprakash, the author of Swarnaprashna.org, brought up the idea of visiting Sathuragiri Hills, I found myself instantly agreeing to go on this journey. It was an idea thrown open to all members of our whatsapp group, that have come together to discuss ancient sciences and holistic parenting.

Unlike myself, to agree so readily to undertake a journey of this kind with people I have not met before, but the idea was very exciting and I had immense clarity that this is a trip that I must take.

I chose to drive from my home in Bangalore to Virudhunagar, a small village about an hour’s drive away from Sathuragiri Hills. I spent the night there at a hotel, waiting for the rest of the group, who were to arrive the next day morning.

I woke early next morning and waited for the group to meet me enroute. The drive from Virudhunagar to the base of Sathuragiri was itself very pleasant. This small village had plenty of temples, all washed clean while the incense of sambrani and camphor wafted through the air even before sunrise. Small houses with cow dung cakes on the wall had roosters crying out loud to welcome a brand new day.

We reached the base of the hills and were ushered into a beautiful mango grove, that was our base camp. The mango grove was a very relaxing place, filled with age old trees with trunks so large that I could not get my arms around them. Each tree was organically grown and was in prime health. Few friendly Rajapalayams (Indian Sighthound) scampered around me pouring out their love. 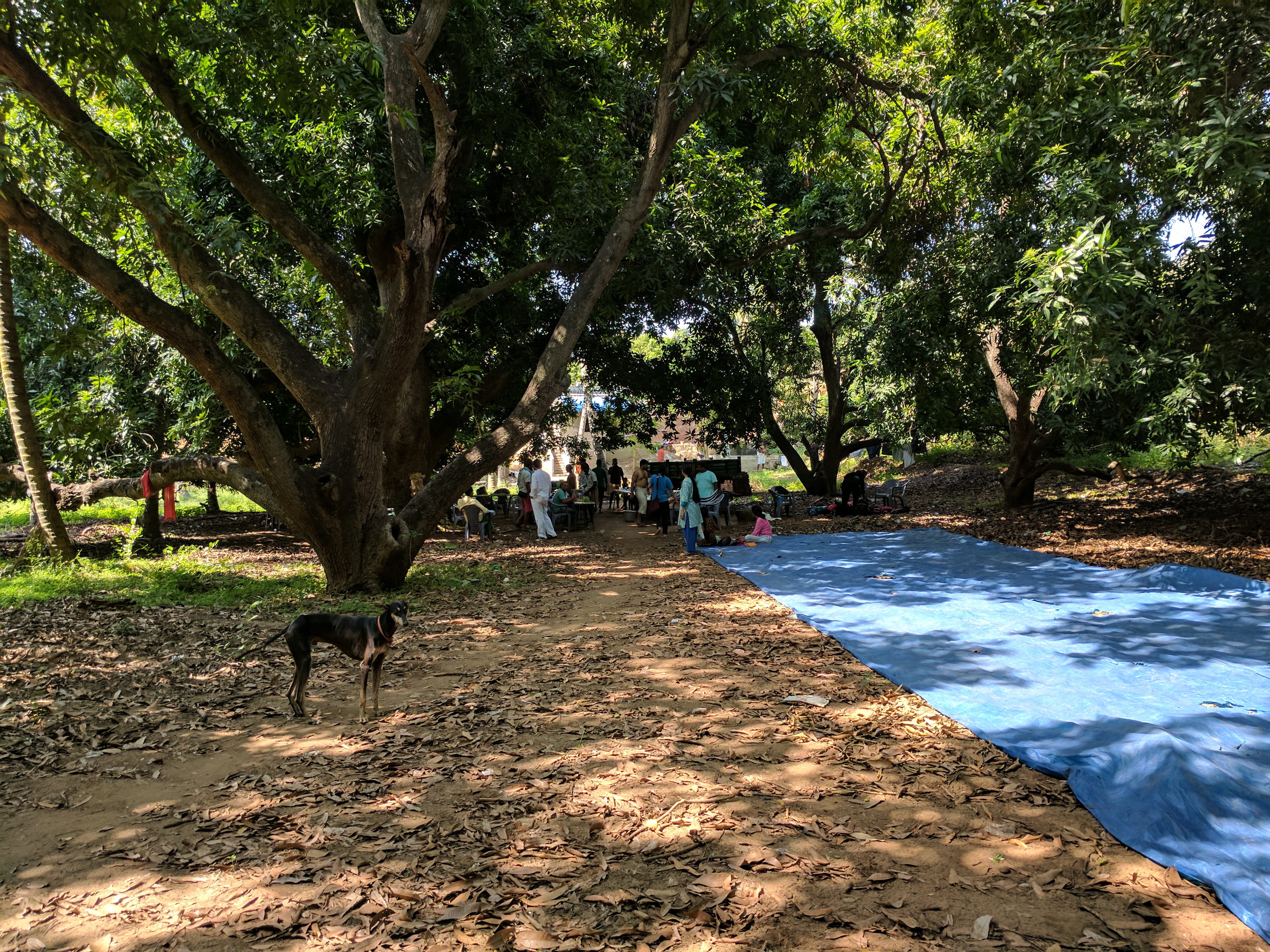 It was here that I finally met  people in the whatsapp group, who were till this point just intelligent posts and a display picture.

We were rejuvenated by a freshly cooked, healthy breakfast. Care had been taken that all meals we had were cooked with wholesome organic produce sponsored by green hands.in

A few minutes walk from the mango grove stood the majestic Sathuragiri Hills. There was a car park at the base with plenty of small shops around. These shops sold everything from sambrani, incense sticks, japa malas and figurines of almost every hindu deity that one could think of.

We began the trek and just a few steps ahead we found a small Ganesh temple. The priest showed aarathi to the deity and filled my hands with a generous amount of divinely smelling vibhuthi. I said a silent prayer that my experience at the hills would be blessed.

The path was lined with people in saffron robes begging for alms. While some looked extremely pious, it was certain that the rest were there only to make a quick buck. I did not feel particularly interested in any of them and simply walked past.

Initially, the trek seemed very easy. The track was neatly laid granite with a step up every hundred meters. “Not bad at all” I thought aloud. We soon encountered a small mound that we had to walk around and then more steps, although this time around, it was cut out of solid rock. Soon the steps stopped exposing a steep terrain of jagged rocks. 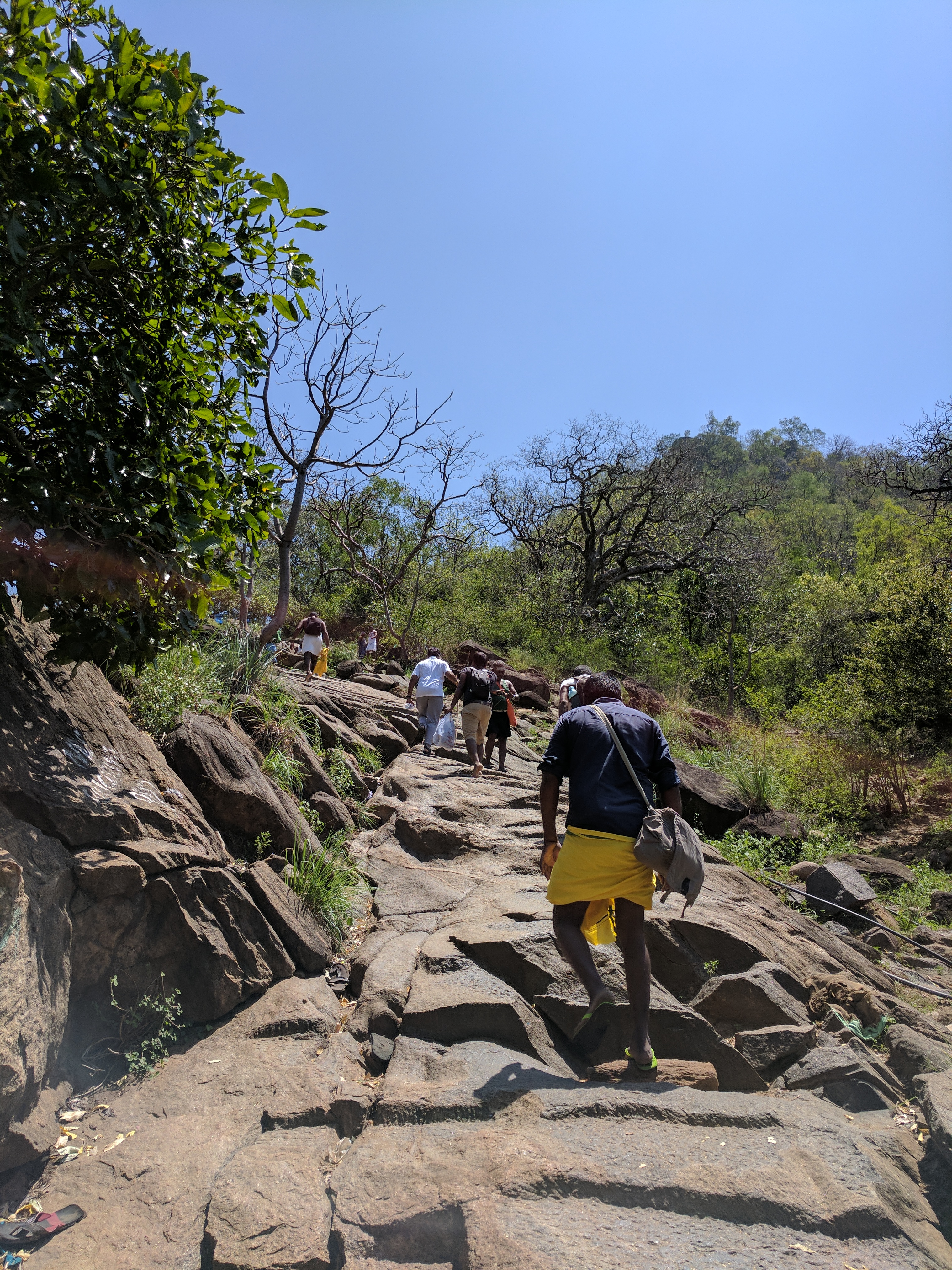 The path was fairly crowded. I was informed that the crowd was due to ‘Shani Pradosham’, an occasion according to the hindu calendar. Well, our group did not come here because of this auspicious time. So let us just assume that the universe intended for all of us to be at Sathuragiri at this very particular point of time.

It was just past noon and  was getting very hot. The group began to scatter, each one going according to his or her physical capability. The trek was gruelling at some points, very steep indeed, and then relaxes to an almost horizontal path. There were few small shrines along the path, some seemed very ancient while the rest seemed like recent add-ons.

Every half kilometer or so, one would find a temporary shop set up by the local people selling buttermilk, lime soda and bottled mineral water. I found myself having generous amounts of buttermilk to keep myself hydrated. Although, I must add here that these shops were only set up because of an expectation of large amounts of people visiting. Most often, they would not be present. However the entire group came prepared. We were even offered some organic treats along the way, courtesy… green hands.in

As I walked on, I reached the Naaval Ootru. A small pond most often filled with sacred water laced with miraculous herbs. Sadly, I saw an dry, empty pit. I expected Sathuragiri to have more water all along. I was hoping to see gentle brookes and a cascade of water falls here and there. But the stark reality of water shortage struck very hard. How we human beings are sucking the planet dry would call for another deep discussion. The picture below shows the roots of an old Jamun tree, usually these roots are submerged in the natural pond.

I then reached the Pathanjali Lingam, a cave with an age old lingam,that featured at the end of a very slippery terrain of rock.The only grip being some roots of trees. Much deeper, were some ropes tied together to help the adventurous folk along. There seemed to be some water flow in this region. I could not muster up the courage to jump in the water and wade my way to the cave. A decision that I regretted almost immediately.

As I climbed higher, I found a tribal woman plucking some leaves from a tree. On looking closer, I found these to be Bilva patra (Aegle marmelos) commonly known as Bael. A traditional medicinal herb most often used in any ritual to appease Lord Shiva. I also noticed creepers and shrubs of Shankapushpi flowers (Convolvulus pluricaulis) growing wild. Their white and purple hues breaking the monotony of rock and green in all its splendor. These conch shell shaped flowers are also used in the worship of Lord Shiva. Sathuragiri Hills is a treasure trove of medicinal herbs, I hope to do a more detailed study of these herbs some day.

Further ahead, I caught a glimpse of Thavasi Paarai, the abode of siddhars, still known to meditate here. The route is fairly inaccessible. I tried to find out if there was a way to get there, but most people said it was too dangerous. We finally reached the summit. It was very crowded On the right paved the way to the Sundara Mahalingam Temple and to the left, the Santana Mahalinga Temple.

I first chose to visit the Sundara Mahalingam temple. It was packed with people who were chanting bajans in praise of Lord Shiva. I chose not to go further when I heard the crowd would clear soon. We as a group intended to stay over night so I always had the option of visiting later and have a quieter moment.

Near the shrine there was a medium sized room with a back door that opens to a wash yard and open forest. This is called the kanji madam. This place was brimming with hospitality and gratitude. Every half hour, a volunteer at the temple would come out and extend a warm welcome to all passersby for a delicious meal. They addressed everyone as ‘Shiva’ here. The meal is absolutely free of cost, however one could leave an offering if they chose to.

We then went to the Santana Mahalinga Temple. I was able to visit this shrine right away. A simple and beautiful place. I enjoyed witnessing the aarathi and exited the temple feeling blessed.

It was evening now and it was getting dark very rapidly. The group had found a hall nearby to rest in, but however I felt the need to find a possibility of sleeping out in the open. I walked back to the Sundara Mahalinga Temple. Most of the crowd had cleared by then. I entered the shrine and found a beautiful Lingam at a slant, decorated with flowers and tulsi leaves. After aarathi, I left the temple and for no apparent reason, I looked up at the sky. It was sprayed with glittering stars. I have never seen the sky so spectacularly beautiful. Amongst the cosmic dust laid the crescent moon just four days before Amavasya.

I sprawled my bedsheet on the pavement outside the temple and gathered some rest. Not the best sleep, but it sufficed. At 3;30 am, I woke to find myself blanketed in mist. Again volunteers at the temple were inviting passersby, this time for some piping hot coffee. It was certainly welcome and soothing.

I found myself a spot directly opposite the Mahalingam. There were about fifteen people meditating there. I sat there and closed my eyes. I went into a very deep meditative state. Peaceful, Silent, Bliss are words that could come close in describing how I felt that very moment. I strive to get this state of meditation when I practice back home in Bangalore. At times I cannot even come close. I presume, that’s why the knowledgeable siddhars still choose to meditate on these hills.

After meditation I briefly met the group and started descending while it was still dark. Dawn breaking at Sathuragiri is spectacular. A feast for all senses. The sky broke into a deep orange and there were hundreds of birds all chirping at the same time. I just paused there to soak up every bit of this beautiful experience.

The descent was very rapid. At times I had to check my speed and slow down on purpose. After a very few breaks, I reached the base. I bowed down at the Ganesh temple where I stood the day before, feeling a deep sense of gratitude and achievement.

I was expecting myself to be overcome with fatigue but surprisingly, I felt rejuvenated. After a scrumptious breakfast at the mango grove, we were addressed by Dr. Selva Shanmugam, a professor of Siddha medicine. An honest and humble individual who explained how to incorporate the science of siddha into our day to day activities. The more I heard, the more I understood that although Siddha is such a deep subject, the philosophies are very simple and could be easily woven into my city bred life.

The time had come where I had to leave. On the drive back home, I was listening to some soulful music, while I asked myself… ‘would I do this again?’ My mind instantly portrayed a picture perfect of all the minor difficulties I had during the trip, but deeper within there was an assured feeling that I would most certainly return.

My discovery of Sathuragiri has just begun.

Prasad is father of two loveable boys. Runs a spa in Bangalore. Loves gardening, reading and meditation. View all posts by Prasad Naidu