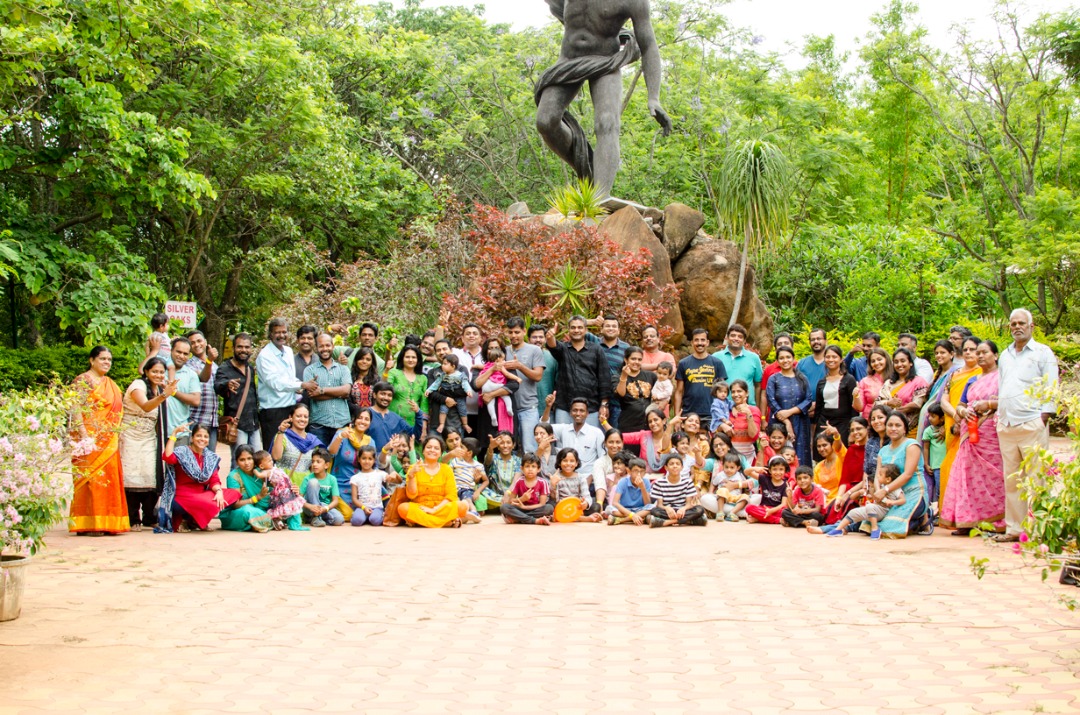 It is a long journey from where this group of parents started 5 years ago, with 6 parents. Today, as we stand, this group of like-minded people committed to nourish their kids and live a holistic life with ancient wisdom gifted to us by our ancestors, has grown strong with 6500+ parents and continues to grow on a daily basis.

After the past Sathuragiri retreat, the community’s energy was so high and determined to meet each other and celebrate this 5th year. Happy to see parents in our community took ownership of this event, felt like a family get together. Some highlights of our WhatsApp post. 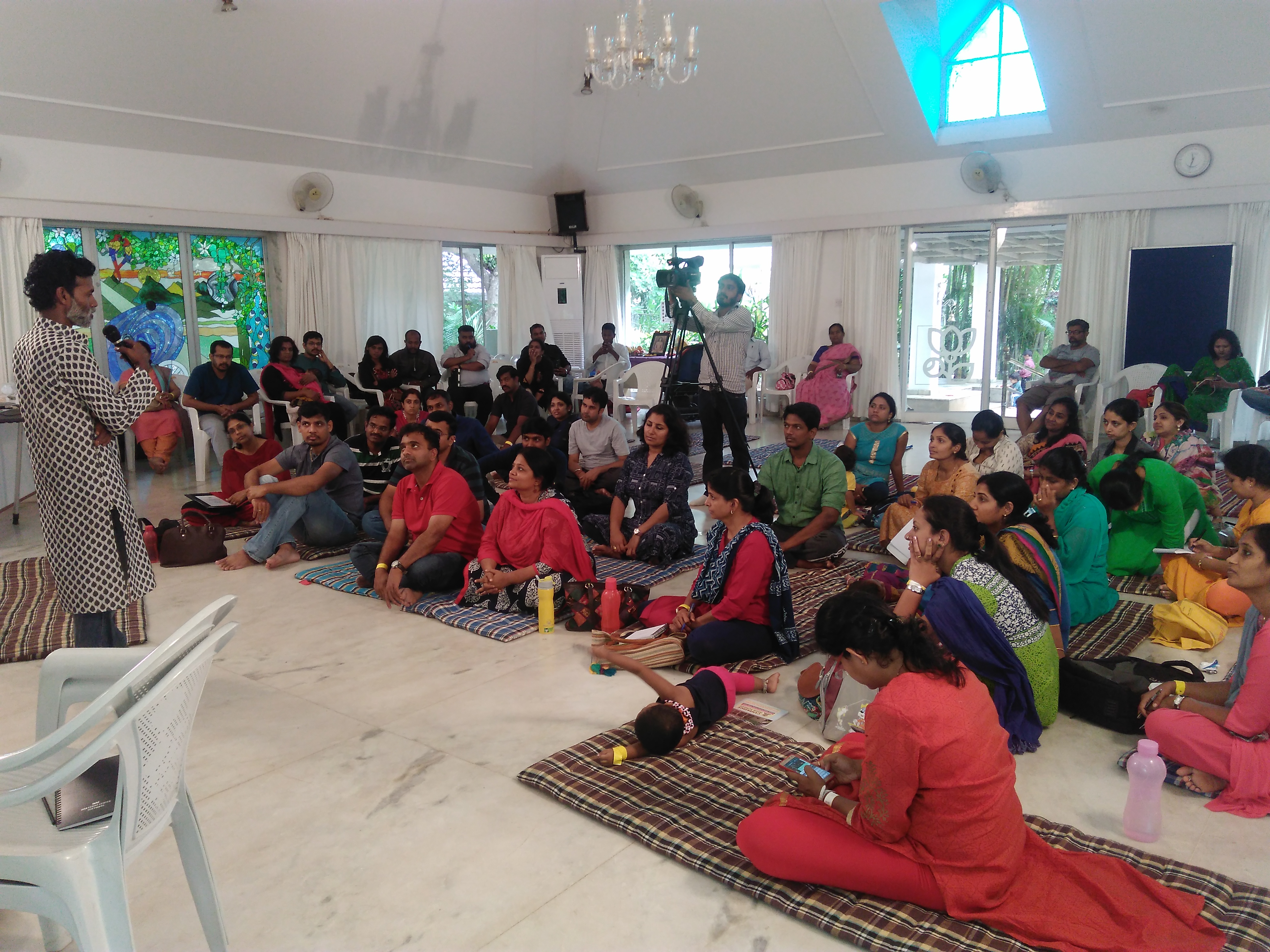 The plan was to start, at 5PM on Friday, the unpredictable weather took over, many parents were stuck in traffic. So we had to delay, all kids found their ways to keep them busy. We started to introduce all the parents and their journey of how they ended up in our group. It was finally good to put a name to face. Gratitude to @Ananth who took a day off on Friday to make sure out station parents reach the venue safer. In parallel he took care of posters, banners, etc. @Ananth @Rajasaker @Mani made sure all the banners were fixed on time. Really glad to see @Nikitha Jain flew all the way from Delhi for this event, @Yoga Jothy from Hyd, @Saranya from Chennai, @Vijaya from AP.

At the resort, we made a solid demand to replace 5 whites. Due to operations and financial issues, they could not do it. So from our community, we estimated the use of 2 poisons, white sugar, and white salt and replaced with jaggery powder and pink salt. In the last min, we came to know from our team that jaggery powder was not available, @Ananth took charge and arranged 25kgs to the event. To make the check-in smooth, @Divya and @Priya planned meticulously to allot rooms in such a way that parents have their own space. Unfortunately, the resort management wanted to fill block by block not random rooms at different rooms. It was the time when most of the parents are stuck in traffic. Then we took help of the resort management and tried to rearrange the rooms. The SoAW was kind enough to offer to upgrade the rooms to accommodate for kids too. So all kids were given same coats, some even had extra beds.

We made a history by planting Birth Star Trees 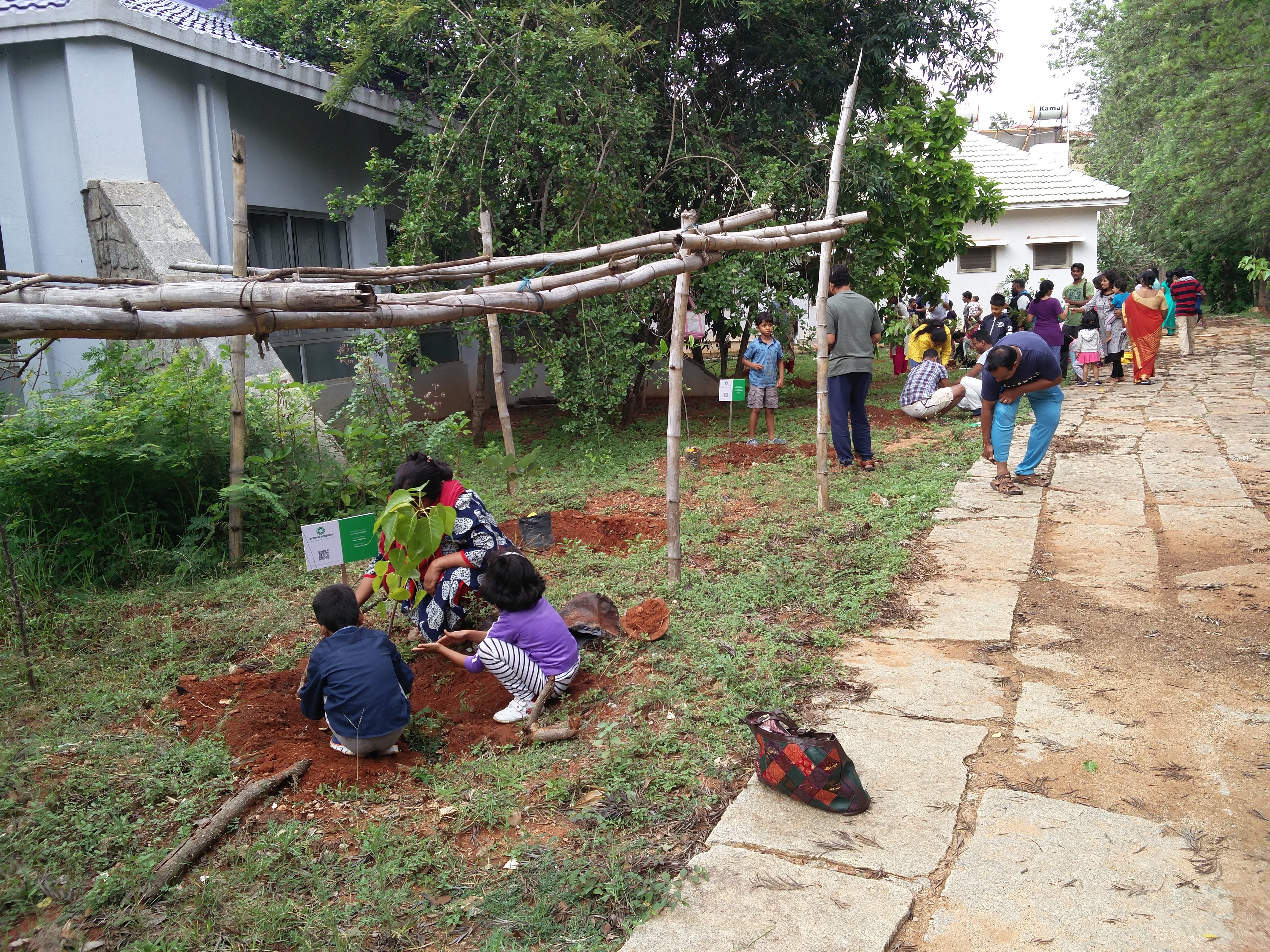 In parallel, we had plenty of issues to source 27 birth star trees, we had to refer back our blog to get alternative trees. @SriNandhini did multiple follow ups with them to make sure we have all the plants. Finally when the plants arrived, none of the plants had a name tag. We had no idea which plant was referring to which star. @Divya and @Srinandhini spent nearly 3 hours to figure out while the session was happening. Luckily Dr. Shankar was of handy help, he was able to help us spot some plants.
@Srinandhi also make sure all were given a small tulsi as a return gift.
@Priya also sourced seed balls from chennai as an additional return gift.

@Srinandhi @Divya – did an amazing work on getting those toys, stationery. They and other parents made countless shopping time for this events. 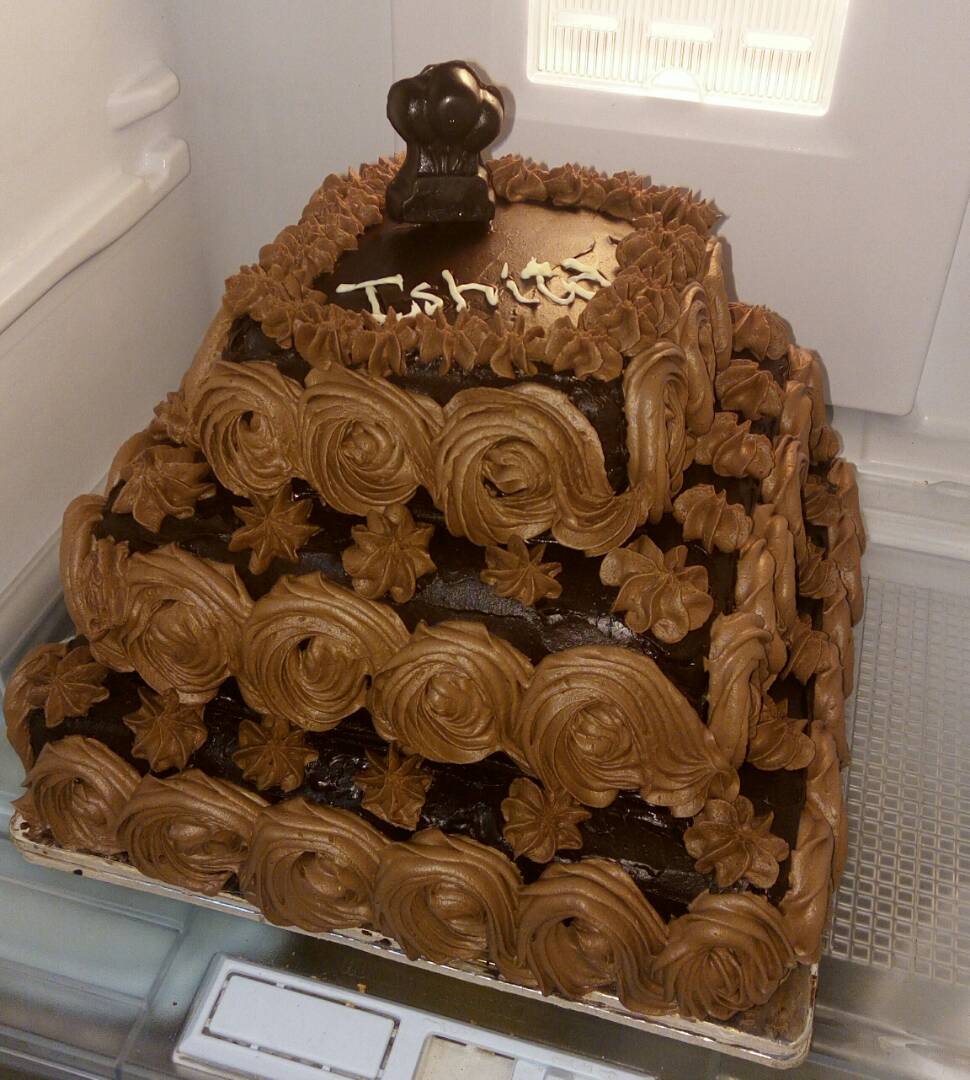 The first birthday is always very important and special to parents than kids. We are honored to see when parents decided to celebrate with like-minded parents and seek blessings. @Sarayna our Nala group active member (and Admin) took charge and experimented with Ragi and millets to make a healthy cake. In spite of her daughter’s health issues, She personally baked and delivered the cake as a surprise. As the principles of reciprocity continue, @Monica arranged healthy sweets for all parents. 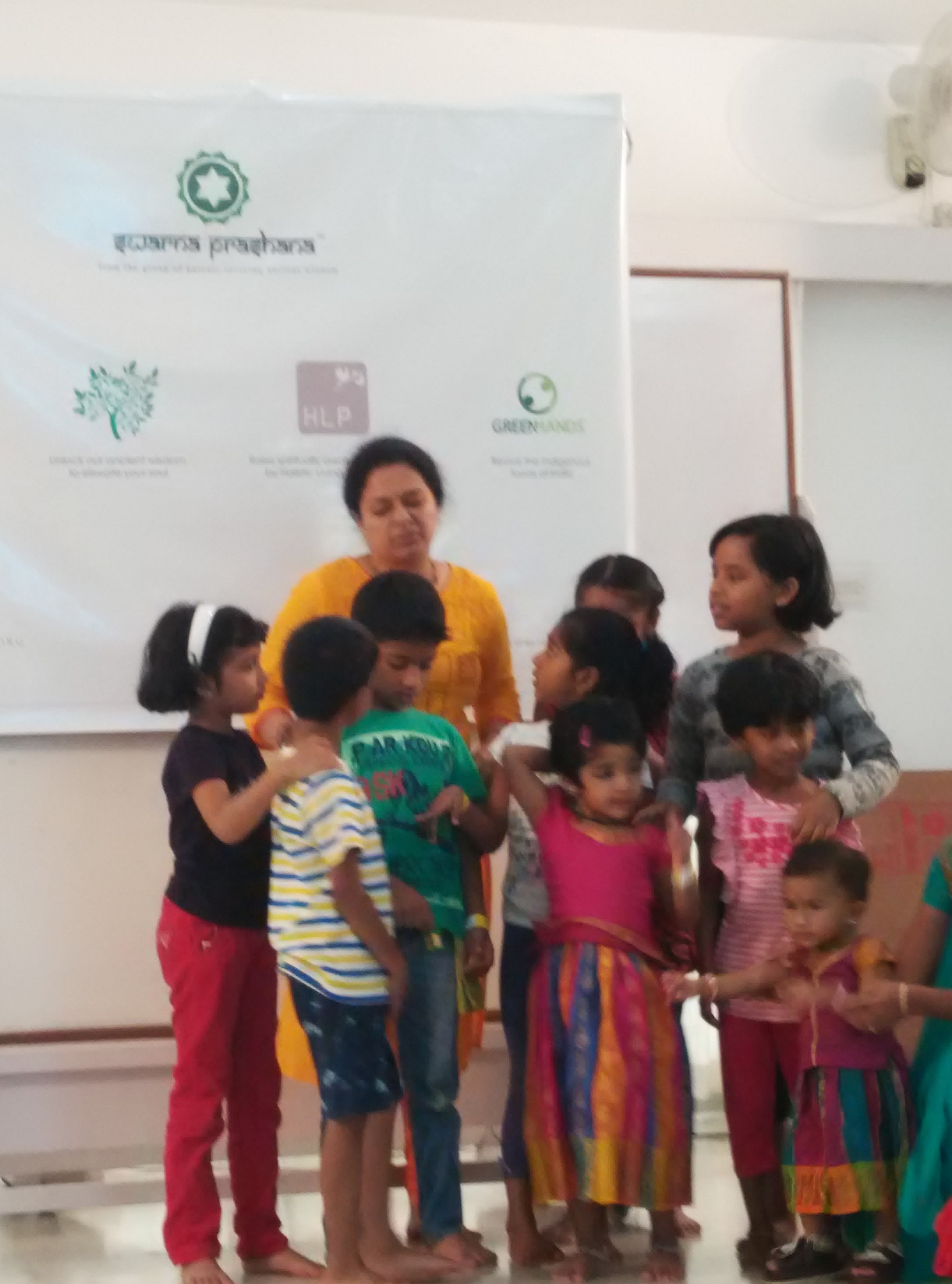 Within 10 mins, @Roopa took charge of all the kids and made them practice shloka. Along with her, kids did a decent job of chanting.

Maran Ji – the showstopper among all speakers 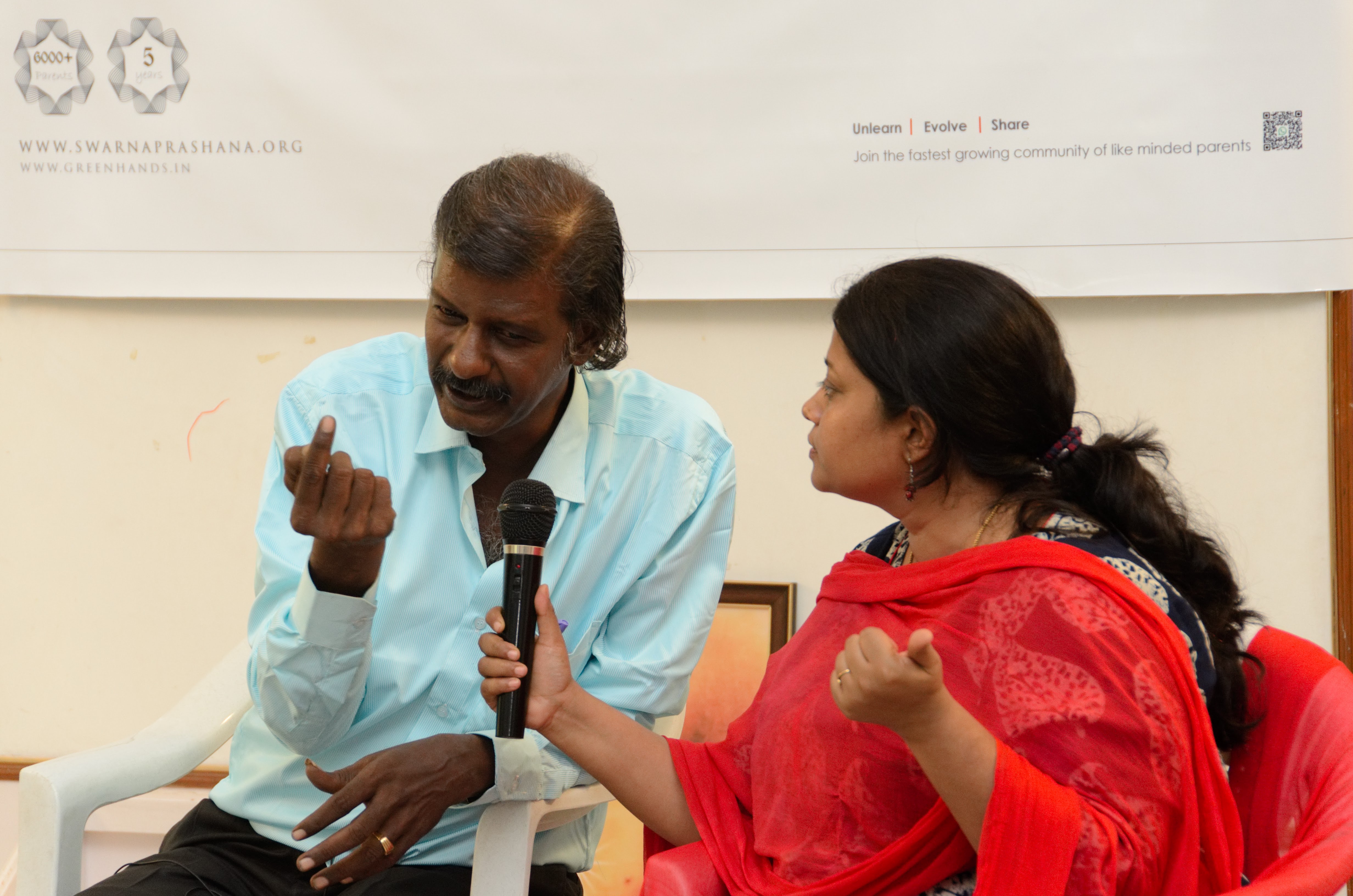 Though all experts share their in depth wisdom, It was this humble healer, who stole the show! Though he is not fluent in other language than Tamil. His true intention, sincerely reflected in his voice and attitude. All our parents were breathless with his sense of humor and able to make his strong point in everyone’s mind. This is one of the reasons I wanted him to be the first speaker. (but have to make a switch in plan due to logistical reasons) @Gayathri did an amazing job to catch up with Maran ji’s high velocity speak into English. But many parents was able to make sense from his talk. His simple and effective solutions was an eye opener. After his talk…Few parents immediately made a commitment that they would translate his recipe book into multiple language book. 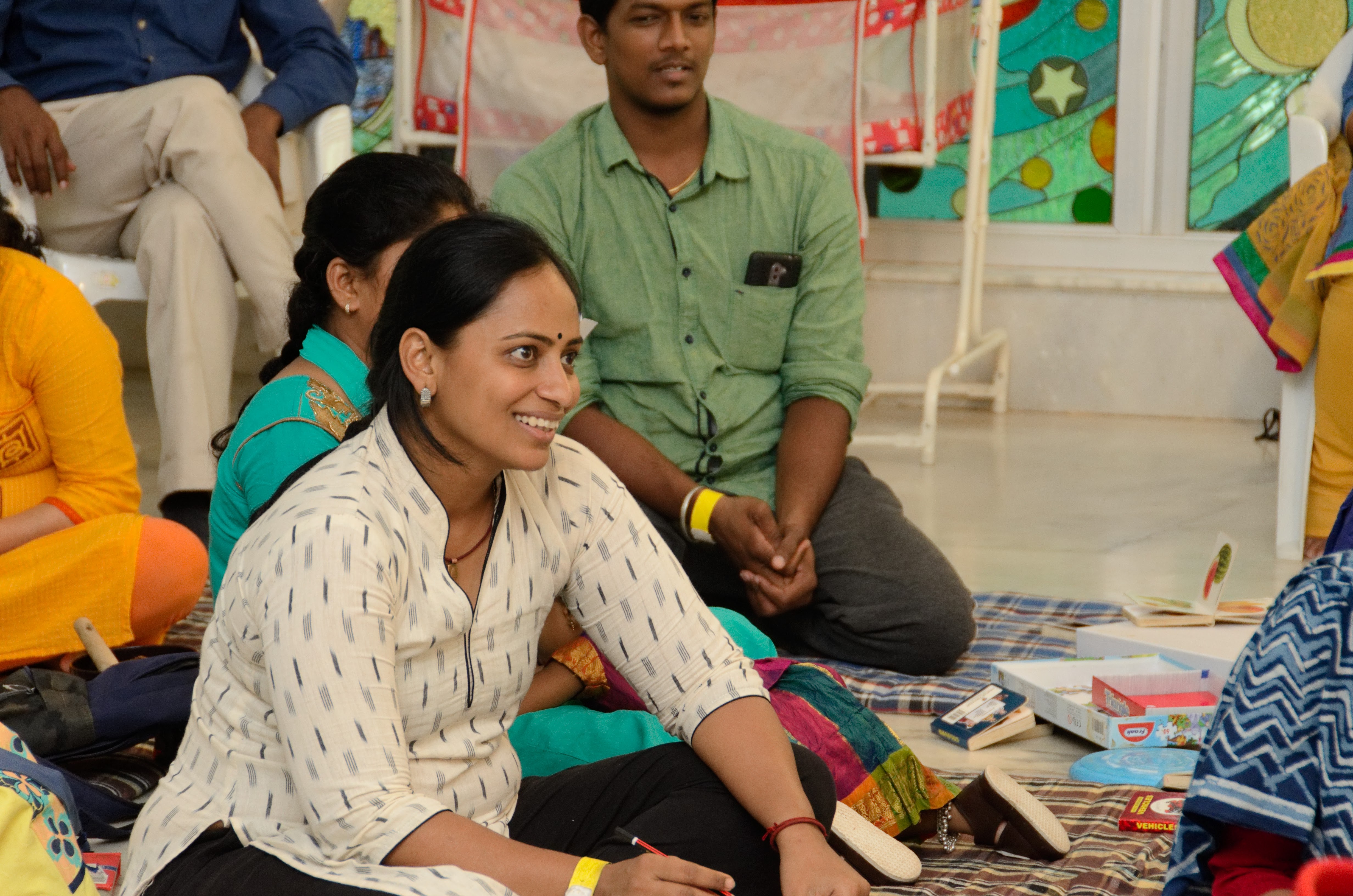 On request of Maran ji. He handed over a small book about laughter therapy, he wanted some parents to quickly learn and do a session, @Vaijayanthi jumped into action and did a session (I really missed it, have to see the video to comment, heard it was good) 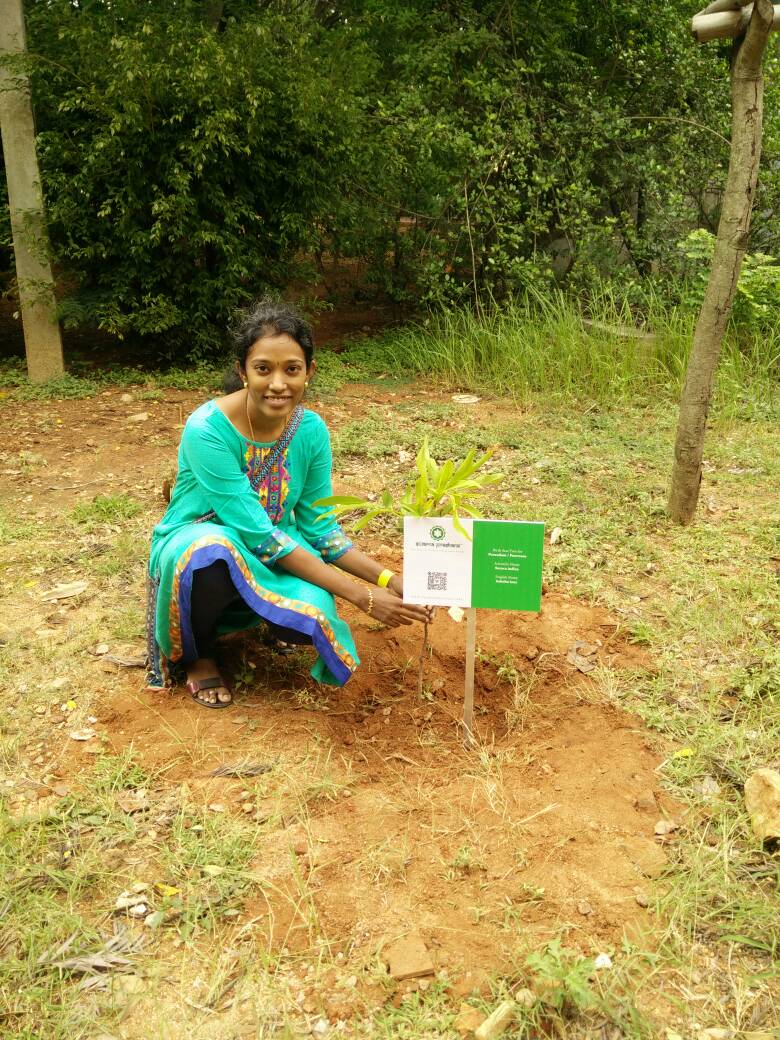 Though we know about the birthday we planned it well. But one of our parent @Divya was celebrating their anniversary, came to us as a surprise. In the mid of chaos at events, handling guest, kids, other running issues, the core parents really hacked a plan to at least arrange a flower bouquet. All parents showered flowers over the couple with their blessings. and gifted Darbai grass meditation mat. Yes @Divya it was a small gift from our community. 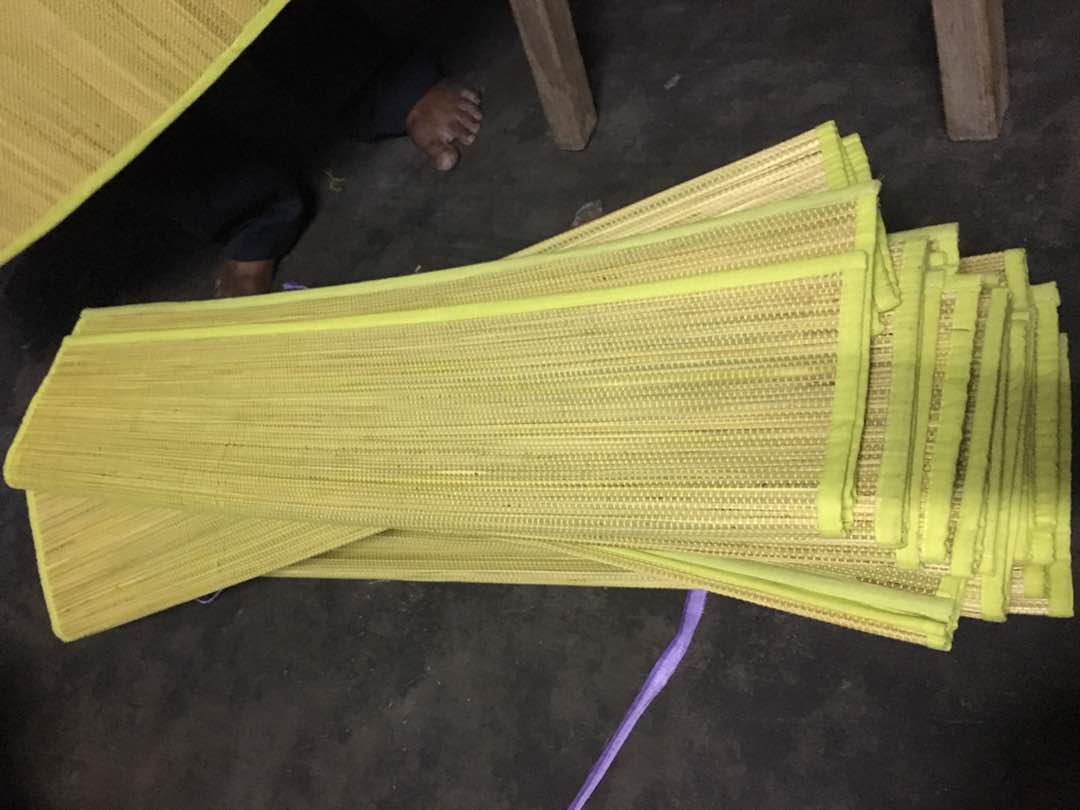 We wanted to give something ancient but spiritual for the guest. One side we have a negative budget to work on and another side, time was limited. At this junction, I was  suggested this idea. But I strongly suggested standard size would not be really useful if you are really a meditation and seek to benefits from the grass. So he had to work his way to find a lengthy grass from Haridwar to make this custom size, I demanded. The extra mat was sold to few parents at the end of the event. (Yes, we will launch this mat on demand)

A Parent almost skipped a Wedding function to attend our event 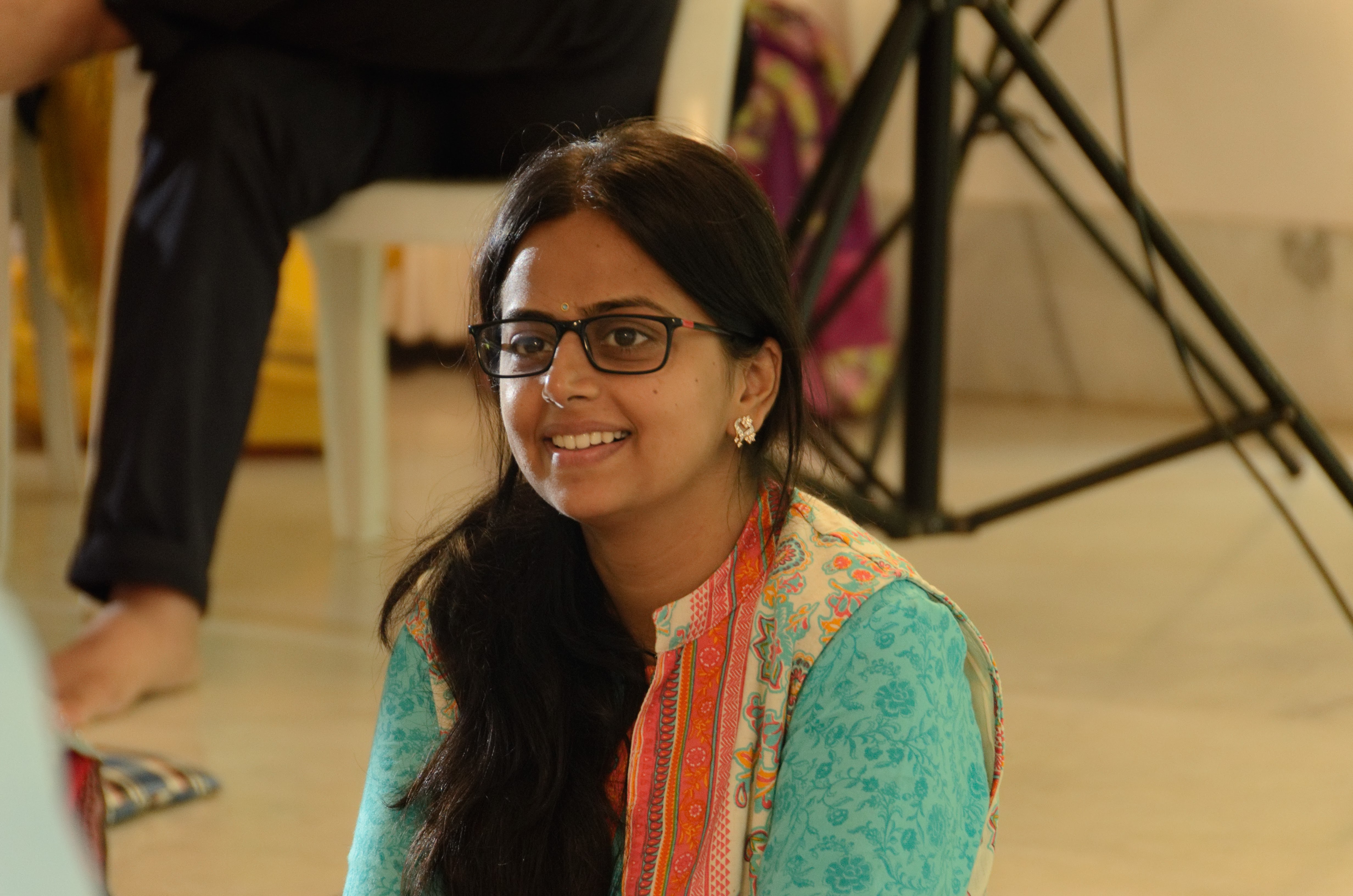 @Priya known as a please use reply button admins, really skipped her cousin’s wedding reception to hand hold our event, late in evening, @Saranya took charge of her to reach the wedding at night and @Priya ran back to the event after the early morning wedding.

It was nice to see the energy of parents clapping and making notice like a movie experience. The first draft copy of the footage of our recent Sathuragiri retreat. Personally, the video has some elements like swp talk, and my long thank you note etc.. I felt this is not in context with the motive, so we will edit it and add some more footage of parents and publish it in few weeks.

There are many untold stories to share about this landmark event of our WhatsApp group. I tried to bring that I could recollect quickly. I might have skipped some, this does not mean their work is unnoticed, it is just my memory (RAM space is limited).

Moving forward, As core group is restructuring, we decided to be more of quality focused and removed parents who do not follow group disciplines. The idea is reduce the group size and keep only like minded people who are serious about holistic living.