A traditional refreshing drink from the land of Tamilnadu. This is referred to as a ” Triple Nutrient Drink” which is rich in protein, fat and fiber. Try this energy drink at your home and share your experiences

Cotton seed milk and coconut milk are the main ingredients in this recipe. A portion of rice flour is added to smoothen the consistency (can use any traditional rice flour/miller flour). This is one of the best alternative for cow milk (vegan milk).

A Traditional Recipe for Aadi Season

Adi kummayam is traditional authentic recipe made in Aadi masam specifically on Tuesdays and Fridays Due to the onset of monsoons, It is an excellent recipe to balance the vata, Strengthen the bones, joints and backbone in our body. It is a nutrition recipe to strengthen the uterus for girls who hit puberty, pregnant ladies and women in their postpartum phase. Adi kummayam is a perfect recipe during this lockdown for protein consumption.It helps in curing constipation.

Dry roast moong dal, urad dal and rice until they turn brown. Keep it aside and let it cool down. Grind to fine powder and sieve if required. In iron kadai, make palm jaggrey syrup to required consistency. Add ghee, Sesame oil and Elaichi to the jaggery mixture.

Keep stirring well by adding sieved flour slowly until the kummayam flour dissolves well with no lumps. Top it with chopped cashew and kismiss. Grease the steel plate with ghee. As the whole concoction gathers together, pour it in the steel plate and let it semi dry. Cut to pieces and serve. Enjoy the tasty Adi kummayam recipe!

A Parententrepreneur ,wisdom seeker, Ms.Lakshmi Bharadwaj is very well known, old parent from HLP Community. She has been a very active member in promoting ancient wisdom our parenting community from past few years and has many articles and blogs to her credit. She beileves that path to Spirituality is through our body.

Your body is your sanctum. Maintain with divinity – Lakshmi Bharadwaj

Roast all the above ingredients until golden brown and it emits a nice aroma. Make appropriate consistency of jaggery and add it to the roasted ingredients along with the grated coconut and sesame seeds.

Stir well until no lumps are formed. Add a little bit of desi ghee and roll it into balls. It can be stored for a week. Make sure to keep it moisture free.

A Parententrepreneur ,wisdom seeker, Ms.Lakshmi Bharadwaj is very well known, old parent from HLP Community. She has been a very active member in promoting ancient wisdom our parenting community from past few years and has many articles and blogs to her credit. She beileves that path to Spirituality is through our body.

Your body is your sanctum. Maintain with divinity – Lakshmi Bharadwaj

Lakshmi Bharadwaj, known as OJAS in whatsapp group, is a home-maker and mother of three lovely kids. She comes with a rich tradition that follows home-remedies, which makes her a passionate towards ancient knowledge in Ayurveda naturopathy and herbs. She is one of the sincere and senior member of swarnaprashana watsapp parenting community. She has been constantly guiding new parents and with her continuous selfless efforts on various social and educative platforms. She is a small startup entrepreneur made it a step ahead in collaborating O&S HERBALS with BALAMRIT and MILKMASLA which stood to her expectations with her efforts. In 2015, She was the Parent of the month for her exceptional guidance in home-remedies to many parents in our whatsapp community. View all posts by Lakshmi Bharadwaj

Want to know more about the fruit that The Nagas cultivated and the Buddhists ate, 1000’s of years ago?

Want to know why bananas are called a fruit of the Wise men?

Bananas are undervalued by us here in India, but to the rest of the world, it holds a lot of importance. The scientific name for banana is Musa sapientum, which means “fruit of the wise men.” Since today is World Banana day, we wanted to share some of the amazing facts you should know about Bananas. Bananas are a rare example of fruit which has three genes from one of its parents, Musa acuminata. It confers the ability to produce fruit without the need for seeds. The word, Bana is of African origin, which means finger. The word was introduced by salves that were brought to the Americas from Africa. In India, it is called plantain. With the help of Alexander the Great, the fruits traveled to Europe and Spain. Later a Spanish missionary brought the fruit to America.

In a document, which is from 400 B.C, quoted in Sanskrit literature, which in the south was known as Sangam literature states that bananas were the only fruit permitted to Buddhists in those days. Furthermore, bananas were cultivated by ancient South Indian people who are once called Nagas.

Bananas originated in Southeast Asia, it was said to be the world’s most consumed food, in the previous times. It is one of the most common fruits all over the world. Not to mention it has twice the amount of nutrition than what can be obtained from an apple. Plus it doesn’t require any specific fertilizer or maintenance except water. Yes, water is the main source to cultivate Banana. Thus said, Banana will grow in all types of climate. It is one of a few fruits which is available throughout the year. No auspicius function or puja is complete without full grown banana plant. Banana plant is treated as god, cow in india.

Banana is one divine plant, that has various used to mother nature and mankind. Right from its root to flower, everything is a healing property. Eg. The roots has a micro-organisms, which can purity the impure or contimanited water. That is why in olden days, you will find Banana trees in backyard. where waste water of the house is directed to it, and the water is filtured and send into ground. Whats an amazing ecofriendly fore sight our ancestors had!

It is recommended to eat on an empty stomach to get more benefits. Or else need to at least eat 1 hr before food or after 2hrs of food. You can also take tea time in the evening. Must avoid eating before sleep. Avoid eating Hybrid bananas. 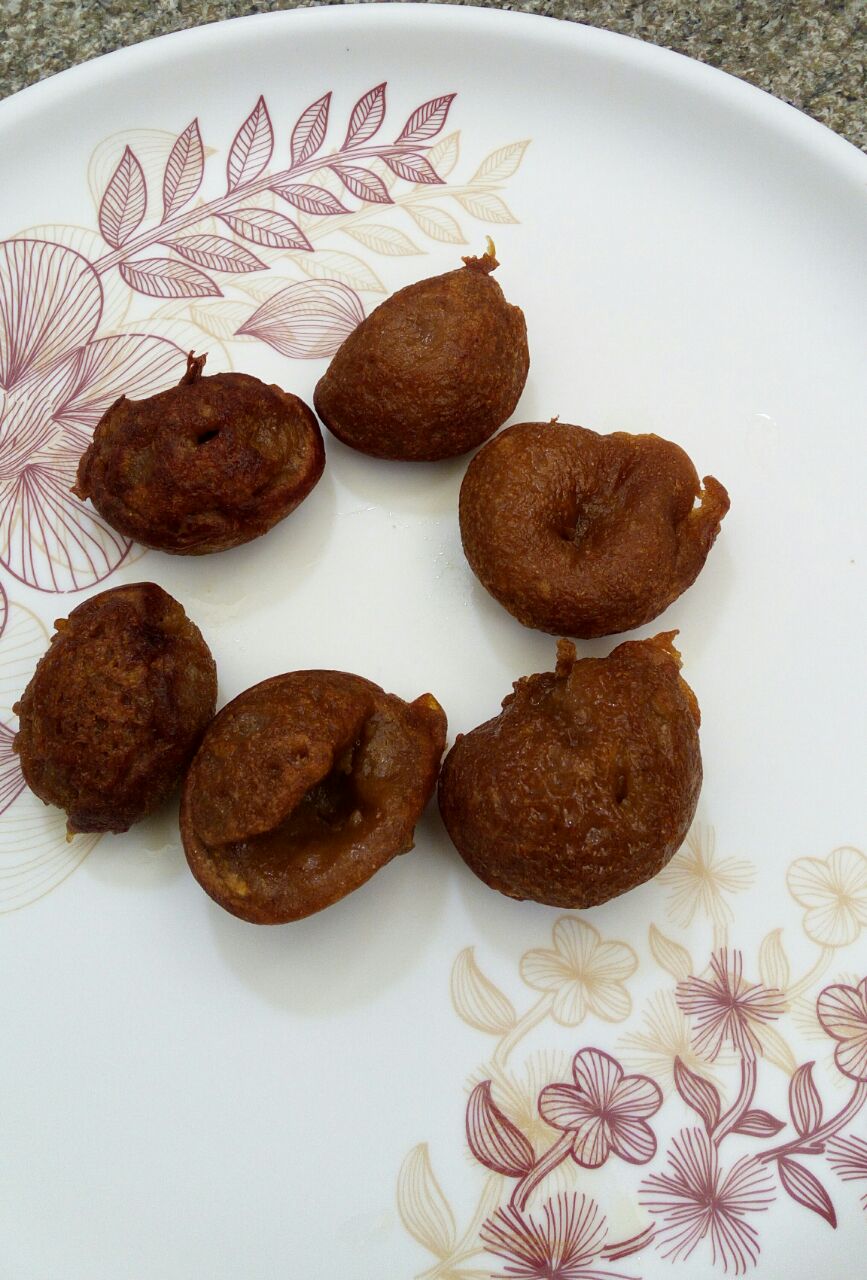 Take jaggery and water in a pan and cook on stove top.. Once all the jaggery is melted remove it from and cool it for a while.

Take jowar flour, grated coconut, cinnamon powder, salt in a bowl. Then add mashed banana and mix well. Then strain the jaggery liquid and pour to the jowar banana mixture and mix well.

Heat a panniyaram pan add ghee and pour the batter. Cook well both sides and remove.

Can make dosa too with the same batter.

I’m HomeMaker and a mother of 1 year old baby girl. I have 6 yrs of IT experience with Accenture and IGATE and currently taken break to take care of my little one. I have an interest towards home made ancient recipes which is very healthy for kids and adults and hence started preparing all those at home and thought of sharing the same with all parents. View all posts by Saranya

Have you ever thought of using Ladies Finger as a starter except in the form of Bhendi Fry? How about if we give you a recipe for a sweet and RAW Ladies Finger starter that you will not only eat happily but will even look for a second serving? Here, take a look at this super simple and super delicious recipe for Ladies Finder Starter. It’s enough if one person has 2-3 of these starters every day to get all the health benefits.

You can also replace the Ladies Finger with Snake Gourd and make Sweet and Raw Snake Gourd starter. Come on now, give it a try!

If you have been looking for a good alternative to Cow’s milk (either due to health reasons, cruelty reasons or any other reasons), you have many choices today – including Almond Milk, Soy Milk, Rice Milk, Hemp Milk, Coconut Milk and Sprouts Milk. While the first five may be commercially available off the shelf in super markets, they can also prove to be a bit economically unviable for everyday use. In such a case, do not worry!

Here’s a wonderful alternative to these Vegan Milk options which is also very very healthy – and what’s more – you can make five different variations of this milk as well! Yes, I am talking about Sprout’s Milk. Let’s quickly look at how to make this milk before we look at the benefits of this milk.

How to make Sprout’s Milk:

Do give this recipe a try and let us know how it worked for you. Perhaps, you can even combine one or two millets and extract mixed Sprout’s Milk.

In the previous two posts, we saw three wonderful recipes for a healthy morning drink (Curry Leaves Kheer, Carrot OR Beetroot Kheer). We can also replace the curry leaves/carrot/beetroot with Greens such as Ponnagannai (Alternanthera/ Matsyakshi/ Honganne/ Ponnaganti koora) or Karisalankanni (Bhringaraj). Both these greens (healing herbs actually) are fantastic for eyesight and skin health.

By alternating between these five different recipes, one can ensure a healthy, balanced nutrition is provided to the family throughout the week. What’s more, these recipes also be a great alternative to cow’s milk being Vegan recipes.

Here are also a few tips that can help you adapt these recipes quickly into your lifestyle:

Additionally, these recipes should take you just about 3-5 minutes to prepare provided you have all ingredients handy. This is much lesser than the time taken to boil milk and prepare your health drink/coffee/tea. So that’s time saved in the kitchen which you can use elsewhere!

If you have a variation of this kheer which you think will work great, please do try and share your feedback with us. We would love to try it as well!